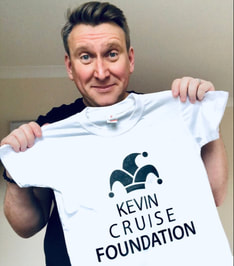 Martin trained at Mountview Academy of Theatre Arts and runs his own Production company ‘Moon on a Stick Productions Ltd’ currently working with the royal borough of Windsor & Maidenhead on the the Desborough Theatre.

​You might know Martin better as his alter-ego Kevin Cruise who was brought to life in 2009 when Martin  created a character as part of a Comedy Course. Within a year, Kevin Cruise was an award-winning regular on the UK comedy and cabaret circuit. In 2010 Kevin was chosen as the lead audition for the fourth series Britain’s Got Talent and made it through to the finals, sailing onto live television in a 16ft, purpose built glittering cruise ship ‘The Fishy Rose’.

Pantomime appearances include Buttons in Cinderella 2010 & 2015, Muddles in Sleeping Beauty 2011, Simple Simon in Jack and The Beanstalk 2012 & 2016, Wishee Washee in Aladdin 2013 & 2019,  Willy Do It in Beauty and the Beast 2014, Chester the Jester in Sleeping Beauty 2017, Idle Jack in Dick Whittington 2018 all at Theatre Royal Windsor for West End producers, Bill Kenwright Ltd.  2020 marks Martin's 11th Pantomime season at Windsor Theatre Royal.

Television credits include four performances on ITV’S This Morning. Appearances on Daybreak, Britain’s Got Talent Series 4, Live at 5, and Britain’s Got MORE Talent series 4, 5 and 6.

This is Martin's 3rd year performing in the Basil Brush Show as ‘Mr Martin’ Basil’s trusted side kick. They've traveled all over the UK performing at Holiday parks, shopping centres and festivals including four days at Glastonbury in the prestigious Kids Field.  In 2019 they  returned to Glastonbury with  two shows 'Basil's Kids Show' & 'Basil Unleashed' at the prestigious Edinburgh Fringe in August.

After his first Pantomime in Windsor in 2010, Martin set up home here in the Royal Borough.  Martin regularly opens local fetes, supports local charities and is an active committee member of the Maidenhead Festival & the Maidenhead Christmas Lights. In October 2016 & 2017 Martin produced the Mayor’s Gala in aid of Thames Hospice, Alexander Divine & Berkshire Community Foundation.

Martin married his partner in 2014.  It was to be the first same sex marriage registered in Maidenhead.  Martin is a keen photographer.  His work has been published in various magazines and has won a variety of photography competitions over the years.  Martin enjoys swimming, walking his two beloved dogs and is a very good cook.  Martin's husband may disagree with the last statement!